What is Hammer Candlestick

Traders in the financial markets often make use of candlesticks as a great visual aid to analyse and monitor what a particular price has done within a certain time period. Candlestick patterns are the most flexible technical indicators to understand the market movements. The patterns can help traders gauge market sentiment for a certain financial asset. For instance, a hammer candlestick is a bullish pattern formed when the price of an asset declines from its opening price, reaching close to the support level, only to bounce back to close at a high.

Talking of bullish candlesticks, a popular pattern is the hammer candlestick formation. A hammer is one of the more important reversal patterns that traders should be aware of. The hammer is treated as a bullish reversal, but only when it appears under certain conditions. The pattern normally forms near the bottom of downtrends, indicating that the market is attempting to define a bottom.

What is Hammer Candlestick?

The hammer candlestick is found at the bottom of a downtrend and signals a potential (bullish) reversal in the market. A hammer is a candlestick pattern, when a stock opens then moves a lot lower during the day then rallies back near the opening price. The candlestick pattern looks like a hammer with the long lower wick from the lows of the day looking like the handle and the opening and closing price body form what looks like the hammer’s head. The lower wick is usually twice the size of the candle body but can be even bigger. To get the clear idea about Hammer Candle and how it look like please find the chart below.. 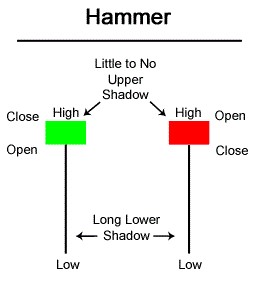 The long lower shadow of the Hammer indicates that the market tested to find where support and demand were located. When the market found the support area, the lows of the day, bulls began to push prices higher, near the opening price. Thus, the bearish advance downward was rejected by the bulls. 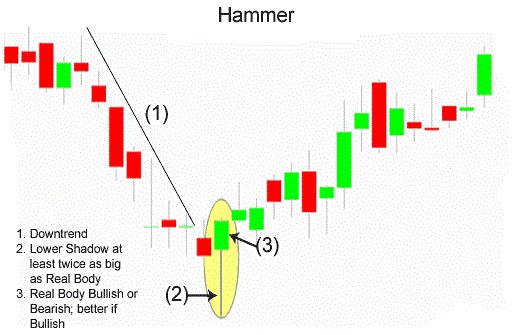 Inverted Hammer
The Inverted Hammer candlestick formation occurs mainly at the bottom of downtrends and can act as a warning of a potential reversal upward. It is important to note that the Inverted pattern is a warning of potential price change, not a signal, in and of itself, to buy. The Inverted Hammer formation, just like the Shooting Star formation, is created when the open, low, and close are roughly the same price. Also, there is a long upper shadow, which should be at least twice the length of the real body. When the low and the open are the same, a bullish Inverted Hammer candlestick is formed and it is considered a stronger bullish sign.
After a long downtrend, the formation of an Inverted Hammer is bullish because prices hesitated their move downward by increasing significantly during the day. Nevertheless, sellers came back into the stock, future, or currency and pushed prices back near the open, but the fact that prices were able to increase significantly shows that bulls are testing the power of the bears. What happens on the next day after the Inverted Hammer pattern is what gives traders an idea as to whether or not prices will go higher or lower. 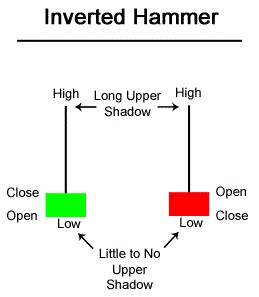 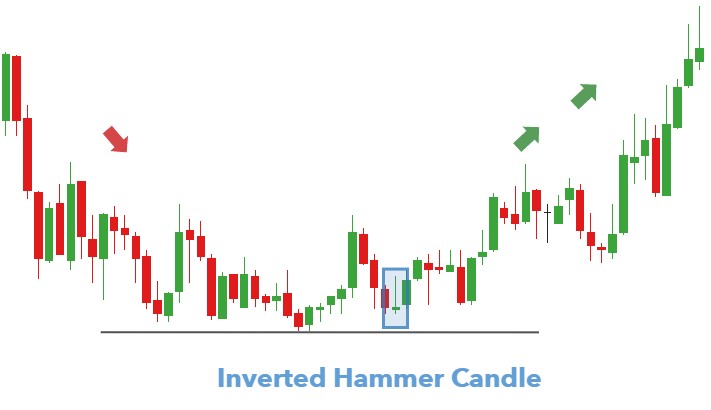 There is no assurance the price will continue to move to the upside following the confirmation candle. A long-shadowed hammer and a strong confirmation candle may push the price quite high within two periods. This may not be an ideal spot to buy as the stop loss may be a great distance away from the entry point, exposing the trader to risk which doesn't justify the potential reward.

Hammers also don't provide a price target, so figuring what the reward potential for a hammer trade is can be difficult. Exits need to be based on other types of candlesticks patterns or analysis.

Difference between Hammer Candlestick and Doji

The hammer candlestick is a bullish reversal pattern made of just one candle. It occurs at the bottom of the downtrends.

Candlestick charts, volume charts, tick charts, point and figure charts, and Renko charts are some of the best charts for intraday trading.

A hammer candlestick is a type of bullish reversal candlestick having one candle in price charts of financial assets. The hammer looks like a long lower wick and a short body at the top of the candlestick with little or no upper wick.

The hammer candlestick always indicates the reversal signal and exit signal. Investors can utilize these signals to close out of their short positions.